Michigan is home to 103 state parks, all with their own unique stories and diverse animal and plant life. When the state honored Painter Bob Ross with 100 “Happy Little Trees” in 2019, MSU Senior Lyla Luoto became part of those unique stories and the parks that contain them.

While offering access to nature, the Michigan Department of Natural Resources (DNR) is both a business and a government agency. As such, it uses advertising and branding in order to establish a loyal base of park visitors. This is where Luoto’s work as an advertising senior and Michigan DNR employee comes in.

The state park system recently launched their centennial campaign celebrating 100 years of Michigan’s state parks. Luoto obtained her current position in the communications division of the DNR just in time to contribute.

“When I first came to MSU and joined ComArtSci Street Teams, I joined them because my main goal was I wanted to use my creative skills for something I cared about,” said Luoto.

She worked in her small cubicle for hours, creating logos, promotional designs and ideas for interactive tools to help kick off the centennial campaign for Michigan State Parks. One of these involved an interactive map that can be accessed from the DNR website. It allows people to share memories they have of specific parks.

“We created this map where people could go in and submit their stories of all the state parks they visited, and it was cool for me because it validated the fact that I was working on something important,” said Luoto. “I got to see all of the stories come in from people talking about how they had their first kiss with their husband at a state park, or they have their family reunion at a state park every year, or how this trail was really special to their grandfather before he passed.” 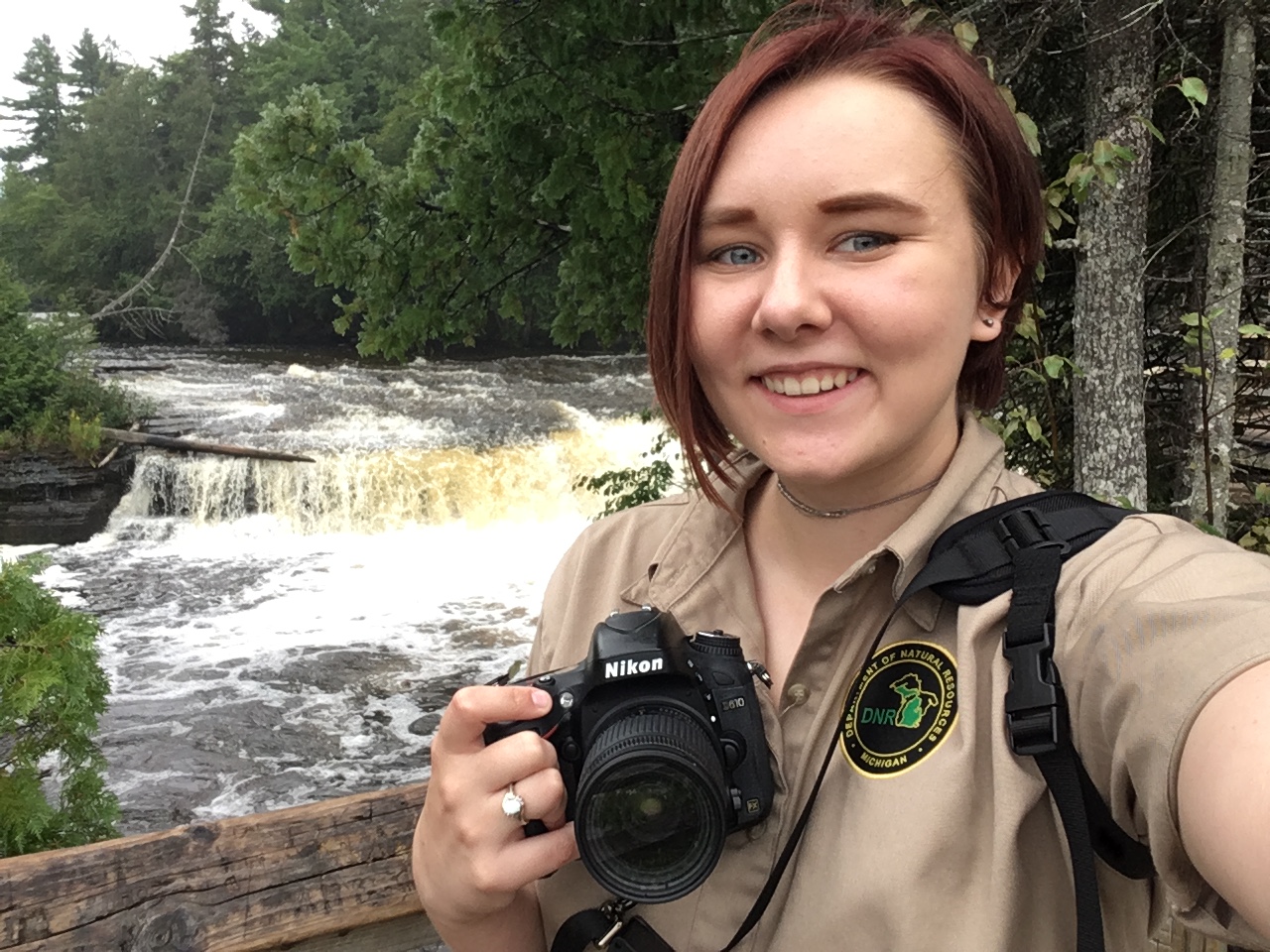 In conjunction with the campaign, Michelle Coss, one of Luoto’s co-workers came up with the idea to rebrand the Prison Grow program, a community service program that allows prisoners to help foster seedlings until the seeds are ready to be planted in the wild. Volunteers then go out and plant these trees in Michigan’s state parks. The program is now called Happy Little Trees. To commemorate the program, Luoto designed signs bearing Bob Ross as he painted a grove of trees. The signs also displayed the tagline “Happy Little Trees Ahead,” to show park visitors where they can visit the seedlings to watch them grow.

As the only student on the communications team, Luoto has a lot on her plate. The DNR not only covers the 103 state parks, but numerous harbors, campgrounds and forests in Michigan as well. Before Luoto joined the team, she stated there was a real need for someone with a more visual mindset to help create everything for the campaign. As soon as she started work, the design requests flew in to the point where she couldn’t remember them all week by week.

“I created pretty much all of the marketing materials, design, art direction-wise for the campaign, because for the marketing team for state parks, it consists of essentially one person other than myself. It’s a big system, there’s 103 in Michigan, but we also cover way over a hundred state forests, campgrounds, harbors. To have a single person working on that is really tough,” said Luoto.

Luoto was proud to be part of this centennial celebration, and contribute to this unique story. She credits ComArtSci Street Teams and Michigan State for her success in the agency.

“All I talked about in my interview was my work with Street Teams for two and a half years prior,” said Luoto. “The stuff that I did on Street Teams allowed me to really demonstrate that I had the working skills and knowledge. [They] felt like I would already know what I was doing.”

The DNR has future plans to honor Bob Ross and to continue to celebrate 100 years of Michigan State Parks. Gov. Gretchen Whitmer attended the ribbon cutting for the centennial, and new promotional materials such as a Stamp and Go booklet have been implemented to improve guest experiences.

The centennial is offering plenty of events and opportunities to get involved with the celebration.

Now until November 22: Paint the Parks, Open-air art exhibits have been implemented in some of Michigan’s state parks to celebrate the centennial, courtesy of the Plein Air Painters Association.

November 29: #OptOutside, The Recreation Passport entrance fee will be waived so families can spend time outdoors the day after Thanksgiving!