Michigan State University is home to one of the first advertising departments in the nation, which is among the largest programs in terms of faculty, research and students. In 2018, the AD+PR Department shines a light on its 60th anniversary.

Since 1958, the program has educated and empowered more than 17,000 Spartans with careers in advertising, public relations, business, design and creative management.

From the New Media Driver’s License to the eagerly anticipated Super Bowl commercial ratings by faculty, the advertising department has become internationally respected and admired for the ability to change with the times and technology.

Grounded in Practice, Elevated by Research

Guided by industry experience, the faculty introduced new courses to capture emerging trends in advertising and marketing. Early additions included an undergraduate course in International Advertising in 1967 and a course on Consumer Behavior in the 1970s. By 1988, the Advertising program ranked third in the nation in research productivity.

Now known as AD+PR, the department is recognized as a leader in digital advertising education. Department chairs have elevated the position of the department, holding leadership positions in the American Academy of Advertising and pursuing advertising research.

In 2000, Professor Hairong Li partnered with a professor from the University of Texas to establish the Journal of Interactive Advertising, which has since been acquired by the AAA.

Evolution of an Integrated Marketing Mix

At the outset, the department offered studies in both advertising and retailing, a program that didn’t sunset until 2009. AD+PR also provided advanced degrees, offering an M.A. in Advertising in 1960 and an M.A. in Public Relations in the 1970s. In 1973, ComArtSci launched a Ph.D. program in Mass Media, with many courses offered through the Department of Advertising.

The new offerings marked a shift in the curriculum to an integrated mix of marketing communications. The International Advertising course was thought to be the first of its kind at a U.S. university, and the Consumer Behavior course was the first to be offered at MSU. The department also lauded the contributions of M.A. and Ph.D. graduate Don Schultz, who became known as the father of integrated marketing communication.

In July 2013, the department changed its name to the Department of Advertising + Public Relations to reflect its new identity in ComArtSci.

“ComArtSci is doing great work,” said Derek Mehraban, a 1996 alumnus, who returned to the college to teach in AD+PR. “We have great people, we have great programs, and we have great new leadership. It’s incredible what we’re able to do with the leadership of our new chair, Teresa Mastin.”

AD+PR continues to evolve in response to a rapidly changing industry, offering courses such as Shopper Marketing and Brand Activation, in partnership with the largest shopper marketing agency in the world.

The department is also home to the New Media Driver’s License, which is taught by Mehraban. The course focuses on using digital and social media to promote a product, company or idea. It has generated several spin-off courses, contributing to the department’s reputation as one of the nation’s most robust digital advertising specialty training programs. 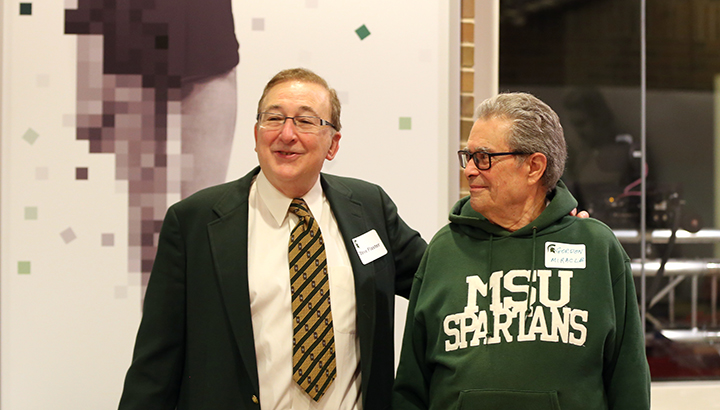 The versatility of the AD+PR Department combined with the cutting-edge technology of ComArtSci has led to many new opportunities for students, faculty and the college community.

AD+PR students have won numerous awards at creative competitions, such as China’s One Show and MSU’s Minds Wide Open. Each year, ComArtSci students compete at the American Advertising Awards, where MSU students brought home a record of 78 ADDY Awards in 2016.

The Media Sandbox, which opened in 2011, encourages students with an interest in the artistic side of communications to take creative courses. Students also benefit from the many labs and centers at ComArtSci, including the Media and Advertising Psychology (MAP) Lab and the Immersive Media Studio.

“This was a different place when I attended the program. When I was here, I took the radio class on the top of the union building,” said Jo Fifarek, a 1976 alumna. “It’s changed a lot since then. The gaming, the electronics, the graphics, the branding, the filming studio — everything the college is able to do right here in this building.”

Fifarek and Mehraban were among the alumni who gathered to commemorate the 60th Anniversary of AD+PR at a special event held on Oct. 5, 2018. They joined past and current faculty, students and alumni to reminisce about the early years and celebrate the growth of the department.

Rhodes Appointed to Associate Editor of Psychology of Popular Media