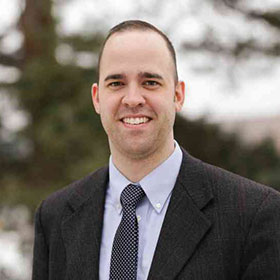 Dr. Russell Banks was awarded his PhD from Michigan State University in the Fall of 2019. He is currently studying the effect of  brain injury on motor control and the potential use of neuromodulation (TMS and tDCS) to rehabilitate speech and language. Dr. Banks was awarded the ASHFoundation New Century Scholars Research Fellowship in 2019 to support his research in the area of sports related concussion. Additionally, he was awarded the Strosacker Fellowship in January 2016, 2017 and 2018.

Dr. Banks completed his Master’s Degree in 2015 under Dr. Hunter’s mentorship in the Department of Communicative Sciences and Disorders at Michigan State University and completed his CCC’s in 2016. For his thesis, he surveyed teachers in school districts across the United States to determine the effect on the voice by: (1) the size of each teacher’s classroom, (2) the vocally demanding extracurricular activities performed by each teacher, and (3) any habits that teachers may have. This research has been presented at several conferences and is currently being written up for publication.

Before coming to MSU, Russ was mentored by Dr. Hunter at the National Center for Voice and Speech in Salt Lake City, Utah—a center at the University of Utah, where he graduated with a Bachelor of Science from the Department of Speech and Hearing Sciences. There he was involved in several voice research projects. These research projects involved voice therapy techniques for singers and occupational users of voice, aging voice, and voice perception. Russ has worked with several voice and acoustical analysis software programs including Audacity, ADSV, LABChart, WaveSurfer, ELAN, TF32, Elan, Praat, various KayPentax programs, etc. Russ also worked with another student at the University of Utah on software that quantified recovery in rehabilitation of various voice disorders.