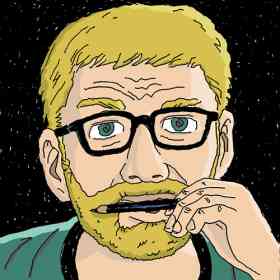 Josh Neufeld creates nonfiction, journalistic comics to offer a new perspective on political and social upheaval, and to give voice to stories that wouldn’t otherwise be heard. His works of comics journalism have been published by Columbia Journalism Review, Foreign Policy, Al Jazeera America, The Boston Globe, Medium, Fusion, and The Atavist, among others. As an artist, he has collaborated with such acclaimed writers as Brooke Gladstone, Harvey Pekar, and Nick Flynn.

In 2014, Neufeld was an Atlantic Center for the Arts Master Artist, where he mentored eight Associate Artist cartoonists. In 2012, he was awarded the Knight-Wallace Fellowship in Journalism at the University of Michigan — the first long-form cartoonist ever admitted to the program. He was awarded a 2004 Xeric Foundation grant for his first book, A Few Perfect Hours (and Other Stories from Southeast Asia & Central Europe).

As part of the U.S. Department of State's Speaker and Specialist program, Neufeld has traveled abroad as a “cultural ambassador,” giving presentations and conducting workshops in the Middle East, Southeast Asia, and Latin America. Neufeld has taught comics in programs and workshops in the United States and abroad, including the School of Visual Arts, Queens College, and Pine Manor College's Solstice Low-Residency MFA in Creative Writing.

Neufeld’s illustrations have appeared in such publications as The New York Times, The Washington Post, and The Wall Street Journal. His books have been translated into numerous languages.

Neufeld lives in Brooklyn, New York, with his wife, the writer Sari Wilson, and their daughter. To learn more, visit www.JoshComix.com.