Inspired by music, Kristen Lueck started her career off on a rare note.

She scored her dream job by age 23, and moved to a career in sonic branding in New York City. In March, she will sound off as one of the speakers at SXSW.

“Sound is powerful,” said Lueck. “There’s so much reasoning and power behind sound. Obviously, it triggers emotion and affects how we perceive things in our subconscious.”

When Lueck set out on her studies at Michigan State University, she was already marching to the sound of her own drum. She doesn’t play an instrument, but she’s always had an affinity for music.

In 2007, Lueck earned a B.A. in Telecommunications, Information Studies and Media, from the College of Communication Arts and Sciences.

While still a student, she interned on The Late Show with David Letterman. She worked on the musical side of the set, coordinating the band and tracking the number of times a musical piece was played for billing purposes. Soon, she was offered a full-time position to work with Paul Shaffer and the CBS Orchestra.

“I think Michigan State gave me the legs to do my dream job, which was Letterman,” said Lueck. “I finished my dream job at 25, then asked ‘Now, what do I do with my life?’”

Lueck leaned on early mentors and the MSU alumni network to rapidly advance into a music-filled career. She is now vice president for Man Made Music, an innovative company where she works as director of business development and partnerships.

“I had a wonderful time at Michigan State,” said Lueck. “What was instilled in me was mentorship. I just remember feeling like there were these giants who had gone before me out in the music industry, who are willing to give me the time of day.”

In MSU’s mentorship program, Lueck connected with prestigious alumni in the entertainment industry. She was introduced to Clark Bunting, CEO and cofounder of Digital Circus Media, a company that coordinates expeditions for high-adventure TV shows like Shark Week, Egyptian Exploration and National Geographic’s Yellowstone Live, among other things.

“Somebody who can give you a leg up and get you a foot in the door can really change the trajectory of your career,” said Bunting. He became a mentor to guide new graduates to leadership positions and help them manage success, while balancing work, relationships and quality of life.

As prior president of the Discovery Channel, Bunting worked with Joel Beckerman, who is hailed as a pioneer of sound and music. Beckerman launched an innovative sound company in NYC, and Bunting referred Lueck for the job.

“The job market is very tough today,” said Bunting, who holds a B.A. in Advertising, an M.A. in Communications and an honorary doctorate from ComArtSci. “I think MSU grads bring a wealth of knowledge and, in some instances, limited experience in their field. If I can open that door, I feel like I’m giving back a bit.”

Lueck now travels around the country, speaking to CEOs and educating leaders of major corporations about the power of sound. 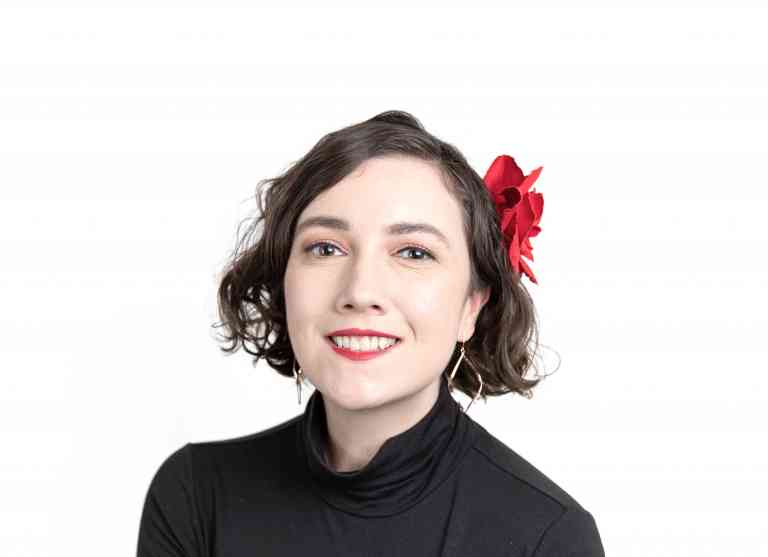 “What Man Made Music really represents is a next generation company,” said Bunting. “What they do is really something called sonic branding. It’s one of those things in music that is really primal. We are hard-wired, whether we realize it or not, to respond emotionally to sound.”

Man Made Music created the IMAX countdown, showcasing the range of audio in IMAX theaters, and designed the sound of the Super Bowl on NBC. They also worked with AT&T to produce a flexible sonic identity, based on a sequence of four musical notes. Now, they’ve won the contract to produce the new sonic brand of Morning Edition for NPR.

“At Man Made Music, there’s this idea at the core of what we believe as a company,” said Lueck. “It’s called Sonic Humanism. It is the power of sound to make lives richer and simpler.”

Lueck discovered the secret to her sonic career when she prepared a TEDx Talk for the EAE Business School. Speaking in Spain, she answered the question ‘Why Do Music and Sound Resonate?’ She conveyed the power of sound, referring to the literal soundtrack of a person’s life.

“Sound gives you superpowers,” said Lueck. “It allows you to time-travel or it allows you to shape-shift, and when it comes to augmented reality, we do it all the time.”

Time travel, Lueck said, happens when sound forms an emotional connection with the listener to bring them back to a time or place, or propel them into a futuristic mindset.

“I believe shapeshifting is a superpower of sound,” said Lueck “—that ability to change perception and experience just by changing the emotional context.”

With Lueck providing strategic direction to Man Made Music, the company is looking ahead to sociomobility and autonomous vehicles. They’ve partnered with Nissan to develop Canto, the sound of the future fleet of electric vehicles.

Naturally silent, the EVs will decrease noise pollution, but they pose a risk to pedestrians who simply won’t hear them coming. New international regulations will require all EVs to make sound, opening up a world of sonic branding and R&D.

Man Made Music is moderating two panels at South by Southwest, the festival known for revealing industry secrets and showcasing emerging media. One will cover Invisible Brand in an Audio-First World. The other will feature Lueck as a panelist, speaking on Sound to the Rescue: Reversing Deadly Design.

“The jarring fact is that a lot of the mental and physical dangers in the world could be alleviated by the proper use of sound,” said Lueck.

On the panel, Lueck will address problems with deadly design—the idea that sound can have dangerous side effects on human health and safety when poorly orchestrated. Across industries, sound can present obstacles and risks, whether it means a silent EV striking a pedestrian, the buzz of ‘the city that never sleeps,’ or the stress and fatigue caused by blaring hospital alarms.

“What they’re finding is there’s no hierarchy of those sounds,” said Bunting. He spoke of Man Made Music’s efforts to develop a hierarchy of sounds in hospitals, creating minor alerts that would allow patients and practitioners to rest unless there’s an urgent cause for alarm. “It’s not just cool branding work. In that, there is a prosocial component to this advertising work that makes life better and safer.”

Lueck hopes to offer solutions to deadly design across industries. At SXSW, she’ll prompt the audience to imagine the sound of the future, while sharing insight from her company’s work to give EVs a purring engine and hospitals a quieter symphony of alerts.

“That’s the real power of sound. Sound provides emotional context, and it guides you on how to feel.” said Lueck. “I study culture and trends, and try to figure out how sound fits in.”

Rhodes Appointed to Associate Editor of Psychology of Popular Media