Five serious games developed by students for ComArtSci's Empathic Games Initiative will be part of “Future Present: Design in a Time of Urgency,” an upcoming fall exhibit curated by the Science Gallery Detroit.

The exhibit runs Sept. 11 through Dec. 11, 2020 at the 1001 Woodward Bedrock Building and examines the intersection of design with art and science. The museum is open and free tickets to the exhibit are available on the Science Gallery Detroit website.

The featured games span from video, mobile and analog formats and promote empathy among 15- to 25-year-olds, sensitizing them to challenges faced by marginalized groups.

Building Empathy on Topics Ranging from Anxiety to Shame

About 30 students from disciplines like media and information, English and engineering participated in the initiative launched in 2019 by the ComArtSci Inclusiveness Committee (now Diversity, Excellence and Inclusion Committee).

Students were mentored by committee members, and drew on resources and expertise available through the college's GEL Lab (Gaming for Entertainment and Learning Lab). The five games address anxiety, family dynamics, body shaming, discrimination and gender identity, and are intended to sensitize players to particular experiences and feelings.

“The project gave students the opportunity to create a game that touches upon stereotypes and microaggressions, and to promote empathy and knowledge of marginalized populations,” said Geri Alumit Zeldes, a committee member, project mentor and professor in the MSU School of Journalism. “All the games reflect actual experiences and injustices these students or their family members have dealt with in their lives.” 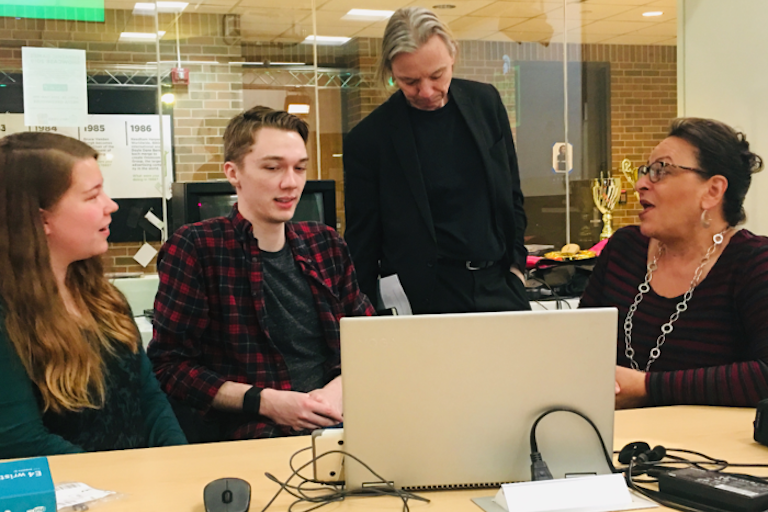 Bridgette Rowe attests to the value of empathic games. The recent graduate of ComArtSci’s master program in human computer interaction served as a lead graphic designer and project manager on one of the five student-driven teams. Her game “A Journey Through Darkness: Biofeedback for an Anxiety Game” was largely based on her personal experiences.

“I’ve had a journey with anxiety since high school,” she said. “Some of my family members did, too. No one really talks much about anxiety. It wasn’t until I had my first panic attack that I really understood what it was.”

Rowe’s game explores the hardships and stress faced by students as they transition from high school to college. Players navigate through anxiety-inducing moments like taking the SAT, working part-time, taking a driver’s test, and applying to colleges. The game pairs with a wristband that measures a player’s heart rate in response to particular stimuli.

Rowe believes serious games are underrated in their ability to help people cope with issues related to mental health and well-being. She said games provide a non-invasive way for people to work through their feelings, and are often available through discreet mobile apps.

“These types of games can provide gateways to understanding and to getting help,” she said. “They can help someone get around barriers and dispel stigmas and stereotypes.”

Rowe applies the expertise she acquired at MSU to her current work as a UX interaction designer at Ford Motor Company in Dearborn. She said she’s looking forward to seeing her team’s game in the exhibit, alongside the other empathic games developed through the grant.

“MSU helped me blend my love of art and the advancement of technology, and to discover fields I never thought possible,” she said. “I’m really honored to be part of the empathic games grant and to see my ideas come to life.”

Beyond the Exhibit: Taking Games on Tour

After showcasing the games in the fall, the Science Gallery Detroit hopes to take the exhibit on tour to select locations, including East Lansing.

Visitors will be asked to follow prescribed protocols to guard against the spread of COVID-19, while much of the exhibit will be augmented by an online component. Games, student developers and faculty mentors featured in the exhibit include:

On the Outside, Looking In: A Game About Others, a Game About Yourself. This narrative-driven game places players in distinct social situations that involve interacting with or experiencing the life of a socially-awkward student. Lead game designer, developer and artist Bingkun Han graduated in the spring with a master’s in media and information. Lead Programmer Stefani Taskas graduated in 2019, and is a graduate student in game design. Rebecca Roman led the game’s development this past year and a team that included David Cowan, Tony Froman and Gabriela Gendreau.

Calisthenia. This turn-based, exergame asks players to perform different exercise routines to fight a monster. The game fuses video games and fitness so users will have fun while leading a healthier lifestyle. Lead Game Designer and Producer Nathan Kellman graduated in the spring with a master’s in media and information, and worked as a game designer at the GEL Lab. Team members include Tatum Cho, Jacob Harrison, Will Johnston, Thomas Lyon, Tristan Okzan and Collin Wing.

Trans Folks Walking. This walking simulator game explores experiences of trans embodiment, being and mobility. The game creates space for players to experience what it means to be trans and builds empathy for trans experiences and causes. Project Lead and Lead Game Designer Cody Mejeur, Ph.D., is a visiting assistant professor at the University of Buffalo. Team members include Robin Ford, Ellie Locatis, Ronny “Madison” Ford, Angela Satullo and Austin Wilson.

A Journey Through Darkness: Biofeedback for an Anxiety Game. This game pairs a wristband and app to measure a user’s heartrate and perceived anxiety when faced with stressful challenges associated with the transition from high school to college. Lead Graphic Designer and Project Manager Bridgette Rowe is an alumna of the human-computer interaction master’s program in the Department of Media and Information. Team members include Carson Jones and Joseph Sak.

Kin-Dread. This analog card game involves players in selecting a kin or relative to take on a road trip, and uses characters from a card. Artist, Designer and Team Leader Jason Wu recently received his bachelor’s in media and information, and minors in game design and development and animation and comics storytelling. Team members include Rachel Allen, Himashi Hewagama, Alex Hogan and Aven Zitzelberger.

Many faculty from MSU's ComArtSci advised the student-led teams, including:

Students Andy Wilson, a senior computer science student, and James Quigley, a junior in media and information, joined the team in August as programmers to ensure the playability of the games for the exhibit.

The Empathic Games Initiative was funded through grants from MSU’s Office for Inclusion and Intercultural Initiatives.

Major in Gaming at MSU 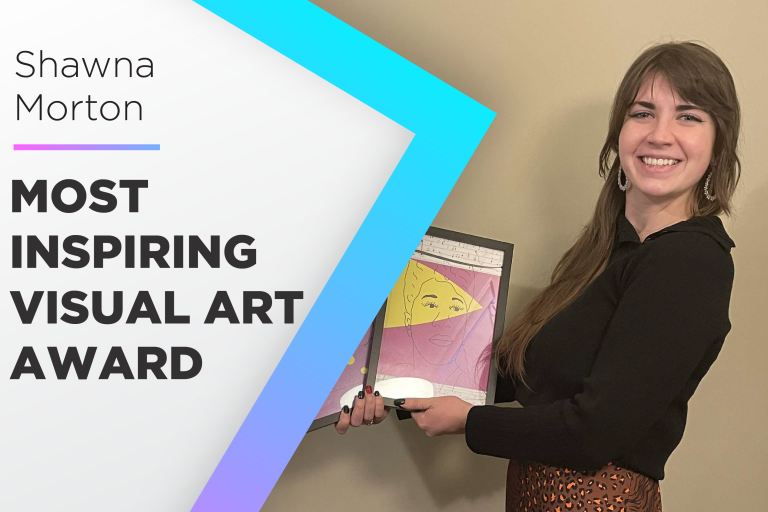 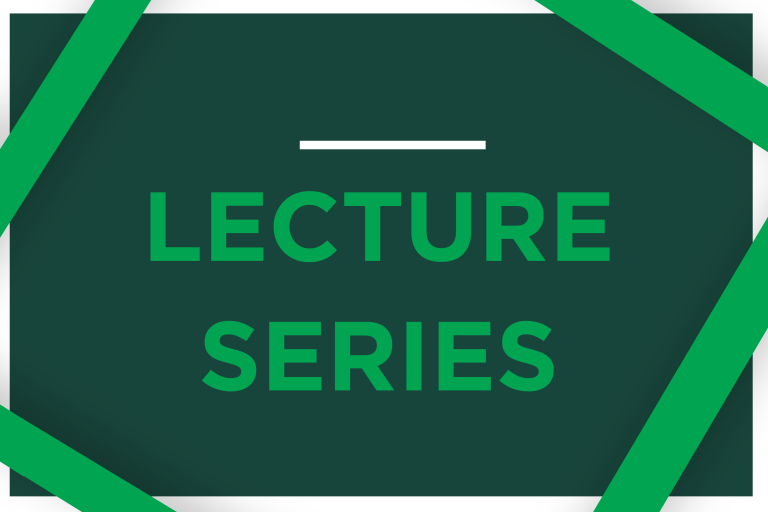 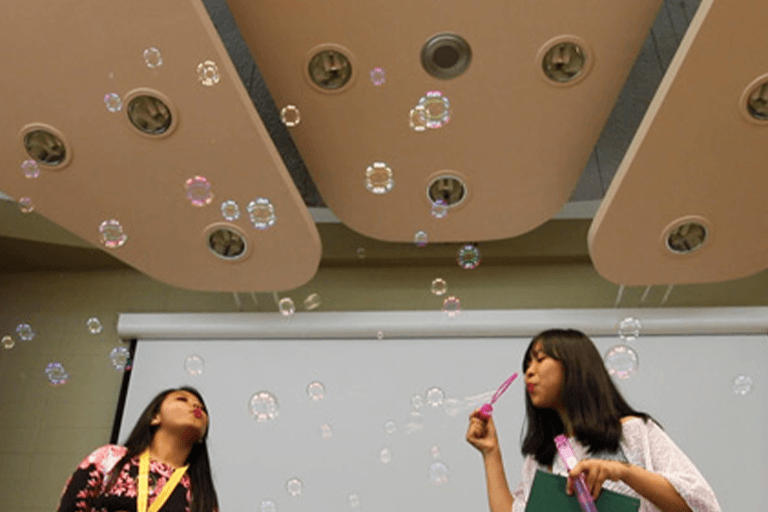