Joanne Gerstner of the MSU School of Journalism has been chalking up a few “first-evers” lately. Those experiences, said the Brandt Fellow Sports Journalist in Residence, will live with her forever, and signify milestones for women working in the male-dominated field of sports journalism.

Gerstner’s recent trail has placed her in local, state and international forums and tasks forces, tapped for her expertise on girls and women in sports. This fall Gerstner was appointed by MSU President Samuel L. Stanley Jr., Ph.D., to the MSU Athletic Council, and acknowledged by Gov. Gretchen Whitmer for three years of service to Michigan’s Task Force on Women in Sports. To add to the whirlwind, Gerstner was invited by the Vatican to serve as a delegate to the two-day Sport for All Conference in Rome. 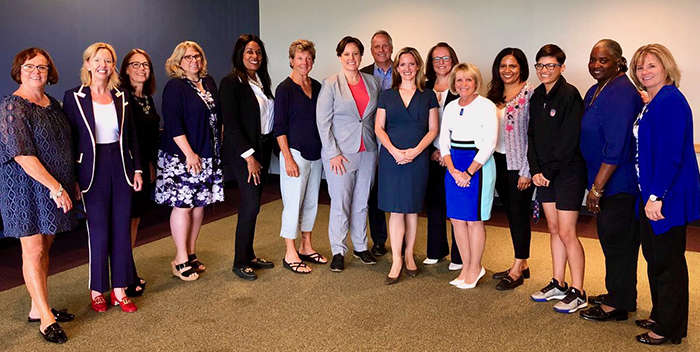 Photo: Gerstner, fourth from left, with Michigan’s Tasks Force on Women in Sports.

“I learned a lot, and was left with much to think about,” said Gerstner. “I was there as a former college athlete, a current busted adult athlete, a woman in a male-dominated field of sports journalism and representing my amazing people at Michigan State University’s School of Journalism.”

Gerstner wrote in her newsletter Open Court about her experience of being selected for the conference alongside such powerful sports organizations as the International Olympic Committee. While it was epic to be among just 250 people from 40 countries discussing the positive role and humanity of sports in today’s world, Gerstner said something equally memorable occurred: She shook hands with the Pope.

After Pope Francis addressed the conference, participants got word they could line-up for a meet and greet. Gerstner stepped in the queue, anticipating her turn to say a few words to the 85-year-old Pope.

“I was struck by lightning,” said Gerstner of the moment she held the Pope’s hand. “Afterward, when we all sat down. I regained my senses and started beating myself up for not being cooler. If I can talk to Roger Federer, Tiger Woods, Paul Newman and every other big star in the world and be totally cool, why did I go into ARRRRRGH! with the Pope?”

Now that she’s had time to process the experience, Gerstner reflects on what she learned and what she will carry forward to help shape policy, direction and education for women in sports and sports journalism.

“It’s an incredible honor to be involved in these spaces where the serious discussions about sports, athlete welfare and development and the future are happening,” Gerstner said. “I always try to bring my authentic self; my experience as a former college tennis player, sports journalist, a woman in male-dominated professions, and my experience working with our great Sports Journalism students here at MSU. I am just one voice amongst many, but I bring my unique perspective no matter where I am. The relationship to sports and a healthy life in all spheres is real; it’s good to see it being explored at so many levels.”