“Sometimes, in a dark room, you need someone to turn on the lights.”

Dawn Jamison ‘00 is a journalist at heart, and she is working to honor survivors by listening to their stories about sexual violence and giving their voice a platform.

An alumna of the MSU School of Journalism, she has written two books with messages of empowerment for women and co-authored three others. One book shares the stories of women and men survivors of the #MeToo Movement. 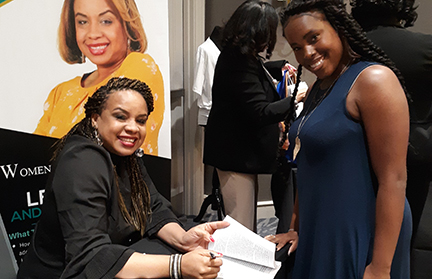 Dawn Jamison signs books at the launch for “Women Everywhere: Level Up and Lead," held in Atlanta, Ga., in March.

When the #MeToo Movement raced across the U.S., Jamison looked back on her own life and how many people she knew who had been impacted by sexual violence. She was compelled to write about the subject, and she published one of the first books to capture personal stories in the aftermath of #MeToo.

“I was floored that every woman that I talked to could share in these experiences,” said Jamison. “It boggles my mind that even in this time, you have women, as much as men, denying that this is a problem.”

To write “Reckoning Day: #MeToo Stories That Inspire You,” Jamison conducted 30 interviews with a diverse range of survivors of sexual harassment and violence over the course of eight months.

One of the survivors is Kate Romero, an actress, former radio host, talent manager and storyteller who prides herself for her ability “to grow from a ‘scapegoat’ to an ‘escape goat.’” Romero struggled through a childhood of physical, emotional, and sexual abuse and later three failed marriages, one which included domestic violence and rape, as well as many abusive relationships.

“While I was going through the abuse, I literally put my happiness on layaway because it wasn’t safe to be happy around the people who repressed me,” said Romero. "Our self-worth is deeply personal, and it is ours eternally. No person has a right to it but us.”

Romero said she spent two years in reflection, learning how to come back from her harrowing experiences.

“I knew that if I could not love myself that no one else would be able to love me either,” said Romero. “A life of joy was not predictable for me as I grew up, and I never stopped believing that I could change my stars. Today, I have joy.

“Never, ever give up hope.”

Sharing the Stories of the #MeToo Movement

The stories in Jamison’s book include first-person accounts of sexual assault and harassment faced by men and women, covering issues ranging from workplace harassment to the abuse of power.

“The whole point of the book is to start something,” said Jamison. She wanted to offer living proof that people still struggle with abuse. “All of these survivors have pushed their old feelings down.”

“It was cathartic to work with Dawn Jamison on her book ‘Reckoning Day,’” said Romero. “Every time I feel heard, I heal a little more. For me, it is a lifelong process to release the layers of abuse as I outgrow them.”

Jamison also wrote about the cycle of abuse and the stages of grief, providing context to readers who might be trapped in difficult situations. She included a digest of resources in the back, so readers could find much needed support in any U.S. state.

“The survivors were not believed, and they didn’t have support,” said Jamison. “A lot of women – and many men, because men are often survivors too – did not know who to turn to.”

Jamison believes change has to start with one person. As someone who has experienced workplace harassment, she can even remember times when her boundaries were violated, and she had to stop to ask herself, 'Why wasn’t I a whistleblower?'

“You have these people in place that give their rubber stamp to the misconduct, it’s almost – in some corporate way – like turning a blind eye,” said Jamison. “When you are surrounded by these different people, it breaks you down.”

Jamison brings 20 years of experience as a journalist and author to her writing, having worked for the Atlanta Journal Constitution and the Grand Rapids Press. She is president of The Renaissance Group, her coaching and media consulting firm, and co-founder of Quit for Passion. She chooses her projects with purpose, hoping to help her readers change their course in life.

Now, Jamison advocates for survivors, in addition to her work as a life coach. Her goal is to help her clients and her readers to take a hard look at areas for personal growth and to inspire them to take action. When it comes to sexual violence awareness, she believes there is still much work to be done.

“My heart just bleeds for all the survivors,” said Jamison. “We need to continue this critical national and international dialogue in order to change the treatment of women worldwide.”

#GoTeal Lives ON: Students Create a Lasting Ribbon of Hope