The 2018 Traverse City Film Festival (TCFF) was an illuminating dive into the creative minds of the MSU and ComArtSci community. My name is Kristina Pierson, and I am a recent MSU graduate and content writer for ComArtSci. This summer I had the opportunity to cover TCFF. I didn’t know exactly what I was signing up for, but I’m always game for an adventure. So on July 31, I packed my car, grabbed a camera and my laptop and embarked on my first “on assignment” work trip.

Traverse City is, without a doubt, beautiful, and I was enthusiastic to play my part in ComArtSci’s presence at TCFF. Upon arrival, I hit the ground running as an event assistant and photographer at the alumni and donor party hosted at The Woz, an interactive gaming gallery powered by MSU. Alumni, donors and their families mingled and reconnected with old friends over appetizers and student-made games. Those who attended were also given a screening of trailers for the student productions “I’m with the Band” and “Crandie’s.”

All weekend players at The Woz leapt into the action with games like the award-winning Plunder Panic and the virtual reality challenge Wizard’s Siege. Strangers became comrades battling for treasure, rivals strumming for rock and roll glory and conquerors attacking high castles. Players moved between stations, eager to talk with the student gamemakers and experience the worlds the designers had poured their time and skill into creating. I even talked my visiting family into testing the waters of VR with H2-OH-NO! When my dad’s headset came off at the end of the game, he was grinning—and he wasn’t the only one. 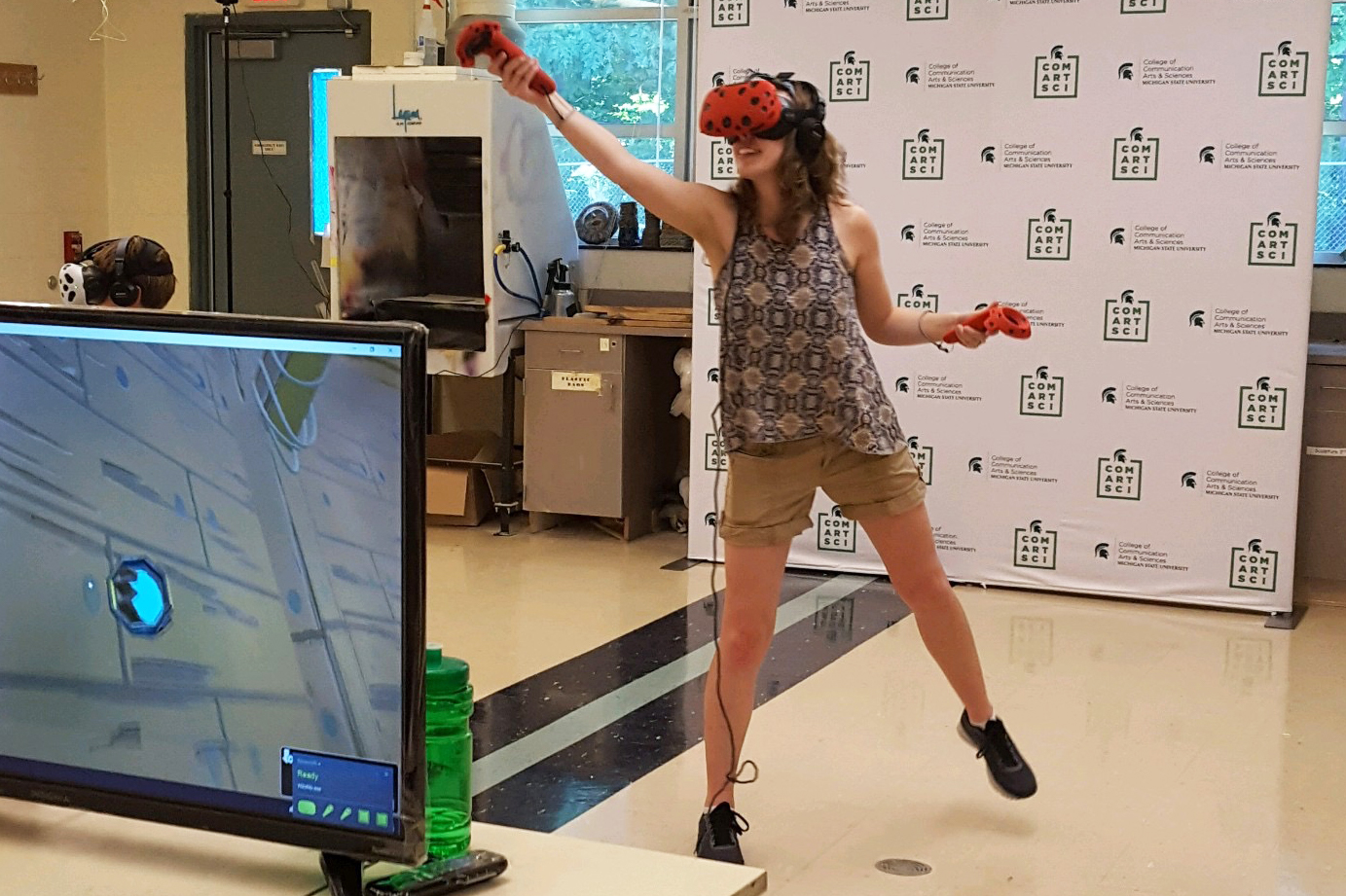 Meanwhile, films about family, survival, romance and tragedy lit theatre screens across downtown Traverse City with wit, insight and sincerity. On Wednesday, the student-made TV pilot “I’m with the Band” and the feature film “Crandie’s” debuted at the Old Town Playhouse. The bright, funny comedy about a New York restaurant turned Michigan diner chef was met with a house of laughter and applause for its story and the student filmmakers who crafted it. I joined in on the after party to congratulate the filmmakers on the success of their year-long labor of love—and occasionally to swipe some sushi. If you follow us on social media, you may have experienced the debut and celebration along with us during Media and Information student and “Crandie’s” writer Camisha McClaire’s Instagram takeover.

Saturday marked the premiere of the MSU student short films. Among the showcase was “The House We Lived In,” a tense, haunting portrayal of a family trying to move on from the loss of a husband and father. Films like “Almost Human” and “All Over Again” explored the human connection, while “Juice” and “Detritus” uncovered the ugliness of obsession and violence. “Sonder” offered a snapshot of a man trying to survive the struggle of the inner city, and “Anya’s Green Card” followed the humorous path of a woman convinced that United States would offer more excitement than her life in India. The web series pilot “Rebel Rebel” captured the audience with its music and style as the hero brawled his way around a bar to a nostalgic 80s soundtrack.

On the heels of the short films, aspiring filmmakers headed to class with Joel Potrykus’s session of TCFF Film School, “10 Mistakes of the Student Film (And Sometimes Mine).” Potrykus, an MSU visiting artist and director of the film “Relaxer,” dove into real-world examples of film tricks and tips with a room of captivated students.

Around every corner of TCFF was a Spartan. Whether they were alumni, interns or student filmmakers, I was thrilled to be one of them and to have the film festival experience. It was an inspiring week, not only because of the stories portrayed on screen, but also because of the brilliant students who told them through joint creativity and hard work.