On Friday, April 8, hundreds of MSU undergraduate students met in the Breslin Student Events Center for this year's University Undergraduate Research and Arts Forum. UURAF provides an opportunity for students involved in research and creative activities at Michigan State to share their work with their peers, faculty, staff, and external audiences.

Students are encouraged to share research regardless of what stage it may be at. Everything from creative activities conducted during classes, internships, education abroad, capstone projects, and more were at the event.

This year, more than 50 participants from ComArtSci presented at UURAF. Highlighted here are just a few of the projects presented by these talented students. 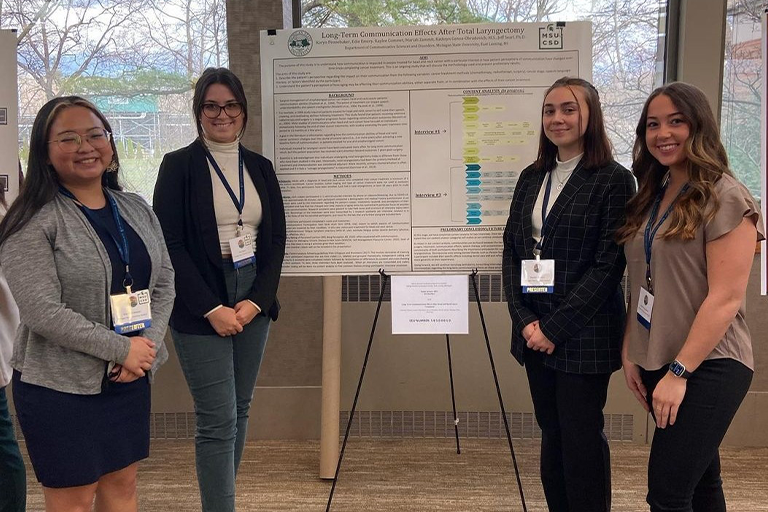 Edie Emery is a junior majoring in communicative sciences and disorders and hopes to become a speech-language pathologist and to work with kids with special needs. Mariah Zammit is a sophomore majoring in communicative sciences and disorders, with minors in cognitive science and linguistics. After completing her bachelor's degree, Zammit plans to get her master’s degree and become a speech-language pathologist.

Emery and Zammit presented research, along with other undergraduate research assistants, regarding the long-term communication effects in individuals after having a total laryngectomy.

Dr. Jeff Searl has helped direct the team throughout the research process and served as Emery and Zammit’s mentor.

"Edie and Mariah have done exceptional work collaborating with two other undergraduate students to advance their study focused on how speech is impacted in people who had surgery for throat cancer at least five years ago," said Dr. Searl. “The study that Edie and Mariah are working on gathers information from the patient's perspective, which will help clinicians and researchers to understand what is important to focus on when assisting and studying this group of patients." 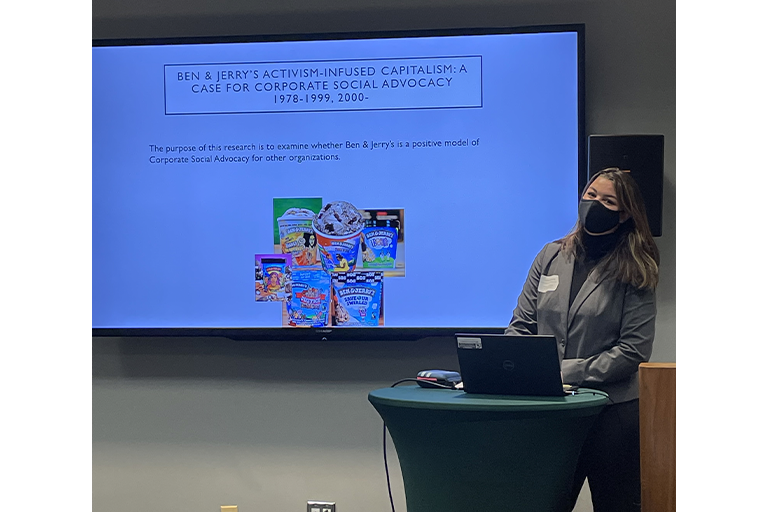 “This study emerged from a conversation Hailey and I had after I had a guest speaker from Ben & Jerry's North America, Laura Peterson, Public Relations Manager,” said Dr. Mastin.

“Laura shared with us that the public, frustrated with the government, is looking to businesses to make change in the world,” said Kenward. This led to her asking if Ben & Jerry's might be a good model for organizations considering participating in corporate social advocacy.

Kenward hopes to spark curiosity among those at the event about whether corporations committing to corporate social advocacy could also assist in the sales of their products.

Building a Virtual Environment as Stimuli for a Psychological Study & Metaverse Technologies: Are We Doomed to Cancer and Blindness? 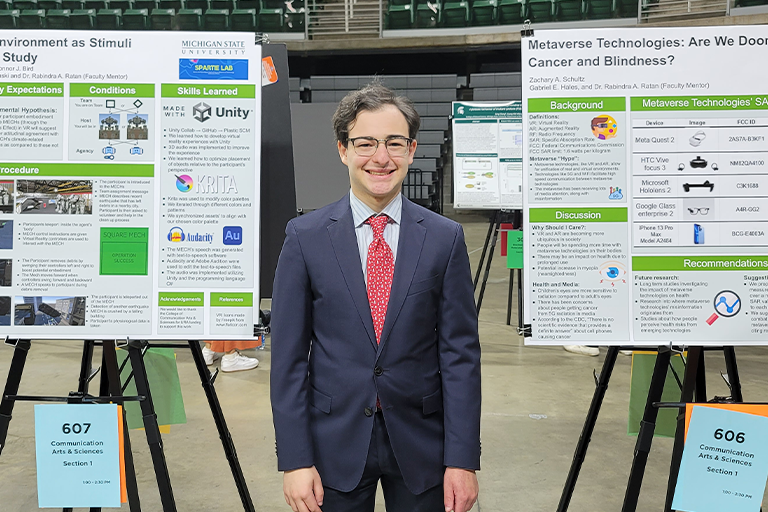 Zachary Schultz is a junior majoring in information science. In addition to his presentations at UURAF, Schultz joined SPARTIE-Lab last semester and cofounded the Spartan Linux Users Group.

Schultz presented two posters at UURAF: Building a Virtual Environment as Stimuli for a Psychological Study and Metaverse Technologies: Are We Doomed to Cancer and Blindness? Schultz acknowledged the hype surrounding virtual reality and metaverse technologies and is excited to share what he learned at the event.

“We took screenshots from our virtual environment to explain our psychological experiment's procedure,” said Schultz. “We also discuss the software we use during development (e.g., Unity, Audacity, and Krita).”

Media and information associate professor Dr. Rabindra Ratan served as Schultz's mentor on both of his projects.

“Zack has been an impressive leader on his UURAF projects,” said Dr. Ratan. “Throughout both projects, he had to develop skills in areas that were completely new to him, but with his love of learning and tenacious spirit, he made quick work of the learning curve. The products of his work are very impressive for an undergraduate at his level.”

Blending In: The Hidden Nature and Evolution of New York City’s Informal Housing Market since the 1930s

Jillian Plant is a sophomore majoring in communication. Her presentation focuses on the various forms of illegal housing that exist in New York City, including the occupation of lofts, garages, and basements, and how these residences have changed over time.

“When certain things become legalized, such as formerly illegal forms of housing, the market can now take control of these assets and price them however they wish,” said Plant.

Plant's mentor, Dr. Guo Chen, discussed how Plant's research not only discusses the economic impact but also addresses the social ramifications of these informal living areas. 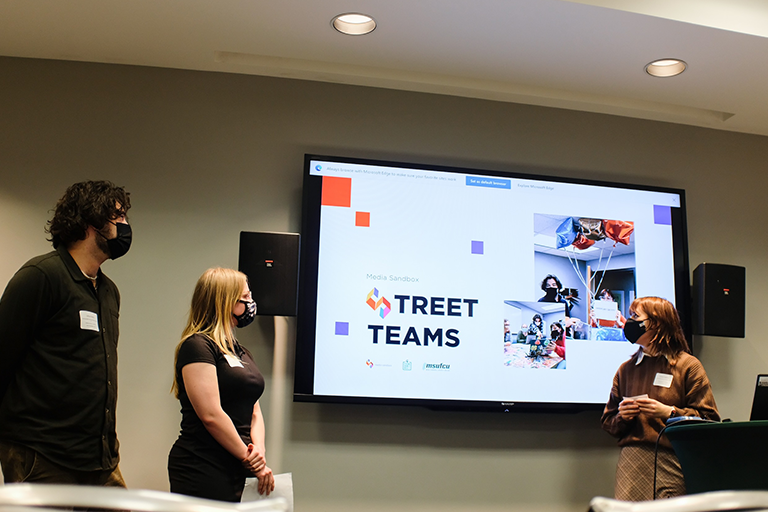 Cyporyn and Patto, along with Jennifer Rousseau and Nicoline Bradford, are a part of the Street Team, “Team Mantis.” Street Teams are interdisciplinary groups of students who partner with nonprofit organizations and assist them with media projects. They have real-world learning opportunities while giving back to the community.

Cyporyn and Patto showcased the deliverables they created for their client: The Lansing Art Gallery.

“We all worked tirelessly this academic year on projects ranging from new b-roll footage, brochures, and redesigning and updating their historical timeline, which will be showcased within our presentation,” said Patto.

“I hope that people will be able to see what a unique and fun organization Street Teams is, as well as get some insight into the world of creating content for nonprofits!” said Cyporyn.

Jeana-Dee Allen is one of the mentors along with Jon Whiting and Kaumudi Mahjan, on Cyporyn and Patto’s Street Team.

“In one of their projects, the team is capturing the nonprofit’s legacy by creating a timeline celebrating the influence they've had on Greater Lansing,” said Allen. “The team is not only using their skills to support the nonprofit, but they are also helping an organization celebrate their almost 60-year impact on the community.” 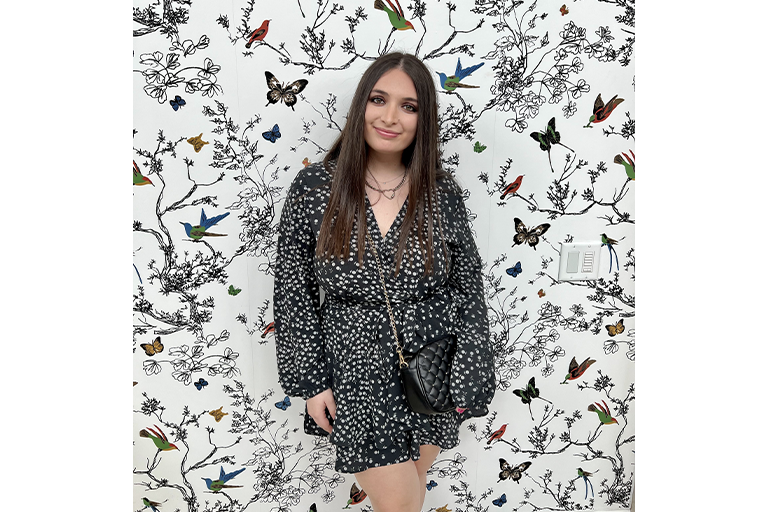 Devin Davidson is a senior majoring in media and information with a concentration in film production with a religious studies minor. This year, Davidson presented a documentary called Generation Gap. The piece explores how the COVID-19 pandemic affected a variety of different people.

Davidson hopes that the documentary leaves viewers with a sense of empathy and compassion. Journalism professor of practice Amol Pavangadkar has overseen Davidson's project as a faculty mentor.

"Generation Gap explores how different age groups coped with the hardships and isolation caused by the pandemic," said Pavangadkar. “After doing their audience research and pitching the ideas to external judges, Devin and her group did a brilliant job covering these very personal struggles to produce this relatable documentary."