Beyond MSU, Custance Finds Passion at The Athletic Detroit

We often have an ideal image of what our future career will consist of. Craig Custance ‘99, ComArtSci Journalism grad, knew one thing was for sure: his would center around sports. So, as many Spartans do, Custance put his nose to the grindstone and set his sights high. Not long after graduating, he began working for the outlet that most young sports journalists can only dream about: ESPN.

Though his days were filled with star players and the latest sports news, Custance knew something was missing. He knew he was meant to start something new and bring a new perspective to the sports community. But would it be worth the risk of leaving a steady job at an amazing company?

Spoiler alert. It absolutely was. Custance is now the editor-in-chief of The Athletic Detroit, an online publication revolving around the world of Detroit sports.

“I loved my job at ESPN and I’m grateful to them for giving me the opportunity to be an NHL Insider, with full support from start to finish,” said Custance. “But the opportunity to build a staff and launch a media company from the ground up in my hometown was more than I could pass up. It was a new kind of challenge and an opportunity to grow in ways as a journalist I wouldn’t have been able to do in my old job.”

With such success, it’s hard to picture Custance walking the halls of ComArtSci just like so many Spartans do each day. But as many alumni make aware, the resources needed to make it to the top are abundantly available. Custance notes that the experience he gained during his time here made a huge difference in his career.

“I loved learning from journalists who had been out in the real world and experienced the job I was in school to learn about,” said Custance. “Hearing their stories, advice and tapping into their networks was invaluable for me at Michigan State.”

Custance also touches on the fact that the faculty here at ComArtSci is hard to beat. Many professors can help guide students in terms of what lies ahead after graduation.

“L.A. Dickerson had a huge impact on my career both in terms of shaping me as a journalist and also guiding me in my career,” said Custance. “I’m indebted to her. Sue Carter, Folu Ogundimu and a number of others also stood out as leaders who made their classes fascinating.”

So how does one make it from ComArtSci to the top tier of the world of sports journalism? Not overnight. Custance understands the importance of internships, and advises students to seek them out.

“I got an internship after graduating, working in the Innovations department at the Atlanta Journal-Constitution,” said Custance. “Once I was there, I volunteered to do anything they’d let me do, from helping launch the newspaper’s web coverage to driving around Georgia to cover local sports. It was an incredible experience and I was lucky enough to get a job at the paper when my internship was concluded.”

And what’s the one thing all students should know how to do by the time commencement creeps up? Network, network and then network a bit more, starting as soon as possible.

“The most important advice I can give to students looking for their next move is to network and get to know people who are working where you want to work,” added Custance. “I got my opportunity at ESPN in large part because I had a good relationship with editors who were already working there.”

Like it or not, that old saying of ‘it’s all about who you know,’ might just be true. After taking the time to figure out where you want to be, introducing yourself to those that could help you find your way inside goes a long way in getting a job.

“It’s hard to land a job without someone advocating for you on the inside,” said Custance. “I have had mentors who have helped guide me every step of the way. I’d encourage students to try and make those same connections.”

As someone that’s walked in the same shoes of many current Spartans, Custance’s best advice is to make one’s chosen career path match their passion.

“Make sure your dream job aligns with your passions, so that working towards that job isn’t a chore,” said Custance. “I run into a lot of people who love sports and want to get into journalism because they’re most excited about the games. But unless you’re also passionate about writing, reporting and developing sources, it’s going to be a challenge to put the work in necessary. The key is to identify a dream job that encompasses all the skillsets you enjoy doing so that chasing the job is every bit as satisfying as landing it.”

With alumni like Custance, it’s clear that ComArtSci can be the starting block for an accomplished journalism career. By making connections and defining your passions, you’re sure to stay at the top of your game. 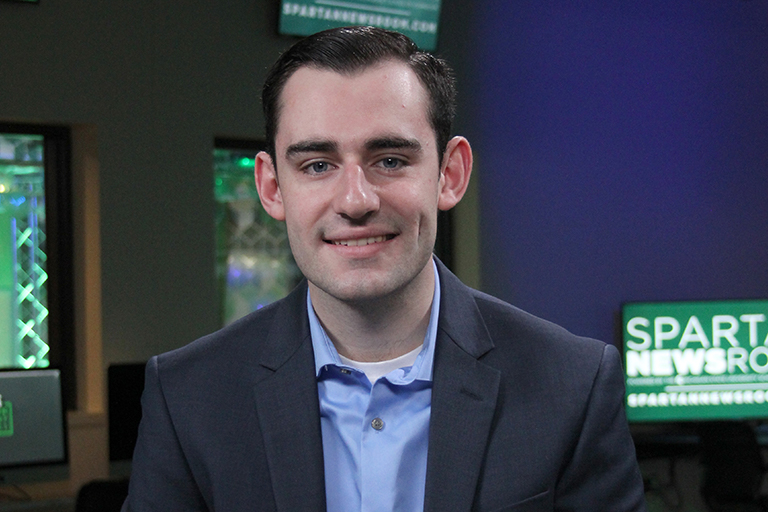