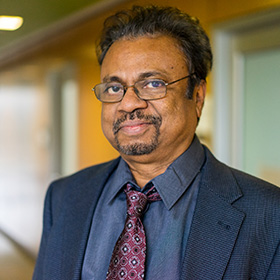 Dr. Swarnavel Eswaran is an associate professor in the Department of English and the Department of Media and Information at Michigan State University. He is a graduate of the Film and Television Institute of India, the premier film school in Asia, and the prestigious film studies program at the University of Iowa. He is an accomplished filmmaker, and his recent documentaries include Tsunami: Waves from the Deep (2018), Hmong Memories at the Crossroad (2016), Migrations of Islam (2014), and Unfinished Journey: A City in Transition (2012).  His research focuses on the history, theory, and production of documentaries, and the specificity of Tamil cinema, and its intricate relationship with Hollywood as well as popular Hindi films. His books include Manudamaum Mandiyiduthalum(Parisal, 2019), an anthology of essays on cinema in Tamil and Madras Studios: Narrative, Genre, and Ideology in Tamil Cinema(Sage Publications, 2015). His fiction feature Kattumaram (Catamaran, 2019), a collaboration with Tamil’s cinema’s leading director Mysskin, is currently on the film festival circuit.