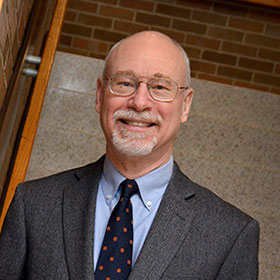 Stephen Lacy is professor emeritus in the Michigan State University School of Journalism. He has written or co-written more than 100 refereed journal articles, more than 60 refereed conference papers, ten book chapters and four books. He has co-edited two other books and written numerous other articles. He is former co-editor of the Journal of Media Economics.

Lacy received his Ph.D. in journalism from the University of Texas at Austin in 1986 and became one of the pioneer scholars in the subfield of media economics and management, publishing numerous articles about competition among local journalism outlets. During the 1990s, he and his colleague Daniel Riffe from University of North Carolina, with the help of graduate students, published several often-cited content analysis sampling studies. Together with Fred Fico, MSU professor emeritus, they wrote the book Quantitative Content Analysis and are currently writing the fifth edition.

His research has been funded by the Project for Excellence in Journalism, the Knight Foundation, the Pew Foundation, and the National Science Foundation. His work has resulted in the Paul J. Deutschmann Award for Excellence in Research, a career achievement award from the Association for Education in Journalism and Mass Communication (AEJMC), the MSU Distinguished Faculty Award, the MSU Teacher-Scholar Award, MSU College of Communication Teaching Impact Award, and the Guido H. Stempel Research Award from Ohio University.

He held several leadership positions within AEJMC and in 1998 served as president, one of three MSU J-School faculty members to hold that position.

Professor Lacy served as director of the Michigan State University School of Journalism from 1998 to 2003 and associate dean for graduate studies in the College of Communication Arts and Sciences from 2009 to 2012. He served as acting dean of the College from February to December 2014, and the Interim Chair of the MSU Department of Advertising and Public relations from May 2017 to June 2018.