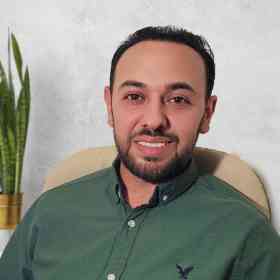 12 years ago, Soud established a specialized rehabilitation center in the United Arab Emirates, and he has been working there as an SLP and general manager since then. Along the way, he was fortunate to manage hundreds of patients from infancy to geriatrics, belonging to the broad spectrum of communication disorders. However, in the last 5 years, pharyngolaryngeal dysfunction became on top of his clinical and research interest. In particular, evaluation and treatment of swallowing difficulties in persons with Head and Neck Cancer. In fact, the accurate overlapping complicated process of swallowing and phonation, and SLPs' role in regaining its function with persons suffering dysphagia and voice disorders, perhaps were the greatest driving forces that led his passion to pursue his studies in this field. Currently, Soud is working in the Lip-Tongue-Larynx Lab with Dr. Jeff Searl, striving to participate in developing a better understanding of the inter-relationship between oro-pharyngo-laryngeal changes and dysfunctions among healthy and disordered populations. Soud also has a special focus on investigating the efficacy of neuromuscular electrical stimulation, NMES, in the treatment of swallowing and voice disorders. Furthermore, studying the potential effect of voice therapy approaches on swallowing and vice versa. In his free time, Soud enjoys poetry writing, photo editing, cooking, and spending lovely times with my family.