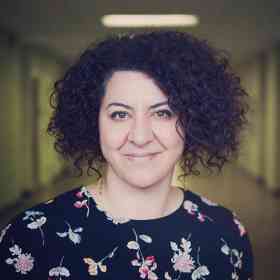 Born in Sidon, Lebanon, and raised in Lansing, Rola Nashef is a writer, director, producer and multi-media artist who draws upon her extensive experience in the arts and involvement in Michigan’s diverse communities as a catalyst for creative expression and social movement.

Named Filmmaker Magazine’s “25 New Faces of Independent Cinema" (2011), Nashef has received the Kresge Arts in Detroit Award (2014) for her long-standing work, and has been awarded the Adrienne Shelley Director’s Award (2015) for her second feature script, Nadia’s House.

Drawing upon her 17 years experience and knowledge of independent filmmaking, Nashef joins the faculty of MSU to help guide students in developing media projects and learn the practical elements of storytelling, screenwriting, producing and directing.