Keith Hampton, Ph.D. has been selected as this year’s recipient of the William F. Ogburn Career Achievement Award for his outstanding contributions in the area of Communication, Information Technologies and Media Sociology (CITAMS). His years of research explore how social media and digital technologies influence society and the way people interact with one another.

Hampton is a professor in the Department of Media & Information where he studies and teaches the relationship between digital technologies, inequality, social networks, democratic engagement, and the urban environment. Hampton also serves as director for academic research at the Quello Center and is an affiliate faculty member with the Department of Sociology and the Canadian Studies Center. He received his Doctorate in Sociology from the University of Toronto and previously held an endowed Professorship in Communication and Public Policy at Rutgers and was an assistant professor at the University of Pennsylvania and at the Massachusetts Institute of Technology.

As a result of his extensive contributions to the field, Hampton was nominated by a group of his peers to be this years’ recipient of the William F. Ogburn Career Achievement Award. This is awarded by the Communication, Information Technologies, and Media Sociology (CITAMS) section of the American Sociological Association (ASA). The section facilitates research and community building in areas related to the social aspects of computing and the Internet, media systems, and the design and use of technologies in teaching and research. The Ogburn Career Achievement Award is given out biannually to a scholar who has produced a significant body of research over 20+ years that advances knowledge in the areas of the sociology of communication, information and media 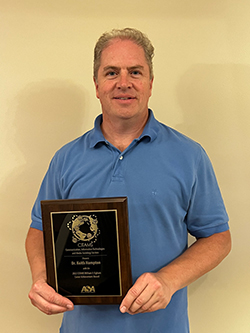 “I am honored to be a recipient of this award. I have been studying topics on community, inequality, health, and political engagement related to the Internet since the late 1990s,” said Hampton.

Andrew Lindner, Ph.D., a professor at Skidmore College and chair of the Ogburn Career Award Committee that selected Hampton as this year’s recipient, provided some details on why Hampton was chosen in his citation for the award.

“His research is remarkably  methodologically diverse, having published articles based on neighborhood ethnographies, various experiments, surveys, social network analysis and content analyses,” said Lindner. “While his scholarly work has been cited over 15,000 times, the committee also recognizes Dr. Hampton’s outreach to computer scientists, practitioners and members of the general public through lectures, editorials in popular news outlets, and the development of i-neightbors.org (for which he won CITAMS’s Public Sociology Award).”

“I feel honored that my work is viewed as an important contribution to the scholarship that has emerged in this area,” said Hampton.

The citation also notes that Hampton has published over 50 peer-reviewed publications in his career. His multitudes of works have subsequently shaped the way professionals in the field think about these various topics.

“It [Hampton’s publications] has widely influenced the field's understanding of how social media shape the development and nature of interpersonal relationships,” said Lindner.

Hampton said he looks forward to continuing his work within ComArtSci and sharing his findings. “ComArtSci is home to a growing number of scholars from this tradition, and I look forward to continuing my research and my interest in supporting the community focused on the sociology of communication, information and media.”

Hampton is set to receive this award August 7 at the annual meeting of the American Sociological Association in Los Angeles.