Gary LaMonte felt fortunate as a first-generation college student in the late 1970s. He received scholarships and grants. He had the support of his parents. He was also able to make up the difference for tuition and books by working a part-time job.

Ever mindful of his budget and spending, LaMonte graduated debt-free from Michigan State University in 1981 with a bachelor’s in advertising, and later with his MBA in 1983. Other students, he observed, weren’t as fortunate.

Today, the retired human resources professional wants to help bridge the financial gap for ComArtSci students in need. In 2020, LaMonte collaborated with the college’s University Advancement team to establish the LaMonte Student Emergency Fund. The fund was created to provide flexible assistance in a timely manner to address extraordinary and unexpected financial hardships that could derail a student’s education. There were a number of times when students were only able to complete their degree because of an award from the fund Gary created.

“I know there are people who work hard and still struggle,” said LaMonte. “By creating and giving to this student emergency fund, my goal is to make an impact today when someone most needs it.”

Kari Schueller Lopez, Director of Academic and Student Affairs in the ComArtSci Academic and Student Affairs Office, said LaMonte is a shining example of how MSU Spartans support one another. His generous gift, she said, made it possible for the College to help several seniors pay for their last semester at MSU. The fund has also provided help for students experiencing food and housing insecurity and other financial stressors.

“Gary's gift has truly made an impact,” said Lopez. “After receiving the award, students often have the time to focus on their education and their career aspirations without the stress of wondering how they will pay for school.”

A degree in advertising, LaMonte said, gave him solid skills in communication and business and stretched his creative thinking. The degree inspired him to pursue a master of business administration at Michigan State, too, with a focus on human resources and labor industrial relations.

“Business life, in general, is about working with people,” said LaMonte. “The people who are good communicators have an advantage. The communication and marketing background I acquired from MSU was invaluable to me as a career HR person. I am tremendously thankful.”

A drive for experience 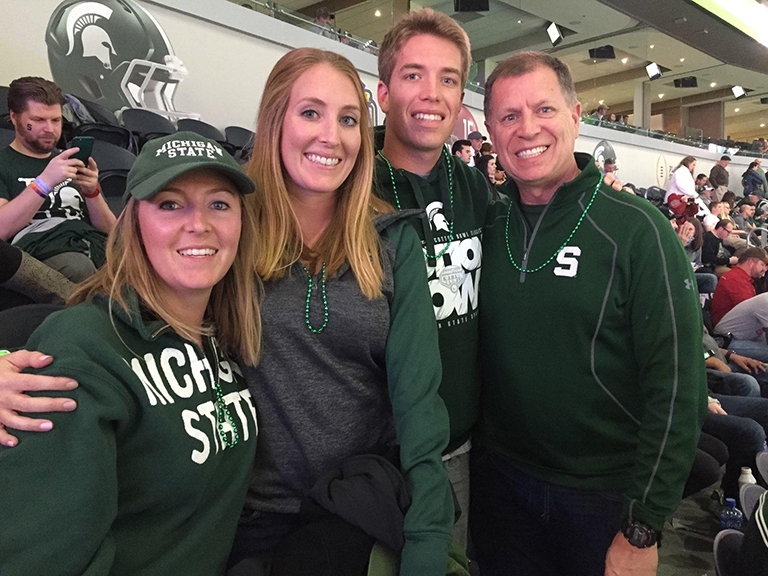 LaMonte grew up in a family of four kids in Buffalo, New York. His mom worked for the utility company and his stepdad was a purchasing manager. When it came time to look ahead to college, LaMonte had a lot of choices. Michigan State bubbled immediately to the top with its focus on world-class education designed to advance the common good.

“What really stood out to me was the diversity of the population,” LaMonte said. “There were people from all over the country and the world, which gave me a great sense of community. Also, you have to acknowledge that MSU has a beautiful campus. That was certainly a factor.”

Lamonte said he was drawn in by the university’s philosophy to advance knowledge and transform lives by democratizing higher education. He liked that he was learning skills that provided him with the ability to make a difference and to effect change in the world. The further along he went, the more he realized he wanted to build a career where he could give back and help others shape and grow in their professions.

“Michigan State, and the College of Communication Arts and Sciences, are all about equipping people with the practical skills and education they need to succeed,” he said. “Gifting provides a way I can help students get both the short- and long-term support they need to have a fulfilling college experience.”

LaMonte travels widely now that he’s retired, but he’s never far in spirit from his alma mater. He plans to continue his family’s tradition of visiting campus for a football or basketball game at least once or twice a year.

“All the foundations for my career and adult life came from MSU,” he said. “There’s even a connection with my wife, Erin, who I met through my best friend and fellow Spartan alumnus. I greatly benefitted from my total experience at MSU. Through giving, I hope to help students have the same opportunities I did, and to help them achieve their dreams.”