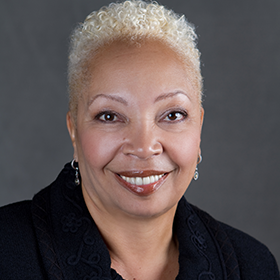 Wanda J. Herndon was the first senior vice president of Global Communications for Starbucks Coffee Company from 1995 to 2006, and created Starbucks’ world-class, internationally recognized corporate communications department. During her tenure, she helped the company grow from 550 stores to over 15,000 stores spanning five continents. For most of her 30-plus-year career, she led communications, public relations and marketing functions for leading brands and Fortune 500 companies. She held senior-level positions not only at Starbucks, but also at DuPont, The Dow Chemical Company and the Michigan House of Representatives.
From 2001 to 2006, Herndon was a minority owner of the NBA Seattle Supersonics and the WNBA Seattle Storm professional basketball teams.

After retiring at the height of her Starbucks career, Herndon founded W Communications in 2006. As president and CEO, she leads the consulting firm that provides strategic communications counsel, strategy development and execution in the areas of brand management, corporate reputation management, public relations, media relations, issues management, diversity, public affairs, executive communications, social responsibility, financial communications and employee communications. W Communications clients include Starbucks, lululemon athletica, Otsuka America Pharmaceutical, Inc., and Washington State University.
In January 2008, Howard Schultz, Starbucks chairman and CEO, asked Herndon to rejoin the executive team as head of communications function to help transform the company. This is noteworthy, because it’s rare when departed executives are asked to resume their former responsibilities. Her return engagement with Starbucks continued through the end of 2008, when she identified a successor and, once again, focused on her entrepreneurial and philanthropic endeavors.

Herndon received her bachelor’s and master’s degrees in Journalism from MSU. She currently serves on the College of Communication Arts and Sciences Alumni Board. She received the MSU College of Communications Arts and Sciences Distinguished Alumni Award in 2001, the MSU Distinguished Alumni Award in 2002, and the MSU Black Alumni Distinguished Award in 2014.  She established the Wanda J. Herndon Endowed Journalism Scholarship at MSU in 2004. She was named one of the twelve leading African-Americans in public relations by PR Week magazine. Additionally, in 2005, Black Professionals magazine named her one of the “Top 100 Black Professionals in Corporate America.” In 2008, she received the Economic and Business Development Award from The Black Women’s Agenda, Inc.; and in 2015, the Puget Sound Business Journal named her a Woman of Influence.

Herndon is a featured speaker with the American Program Bureau, and has been a guest lecturer at colleges and universities including: MSU; Villanova University; Mott College; the University of Texas at Arlington; and the University of Washington.

She was one of the original members of the Starbucks Foundation board, and is past chairman of The 5th Avenue Theatre board in Seattle, WA; is a member of Alpha Kappa Alpha Sorority, Inc., the oldest international African-American women’s public service organization; is a member of the Seattle Chapter of The Links, Inc., one of the largest volunteer organizations for women of color; and is a member of Seattle’s Cancer Lifeline Advisory Committee. She is president of the Wanda J. Herndon Foundation, which makes charitable contributions to numerous organizations, and is an executive board member of the Lacewing Foundation, which provides financial assistance to underserved women and children around the globe. She has served the executive boards of the YWCA of King County, Washington, and Zion Preparatory Academy, a private school in Seattle focused on African-American youth.