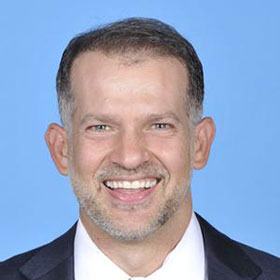 Jason Hillman was named Basketball Chief of Staff/Team Counsel in July 2017 after having spent the prior 12 years of his career with the Cavaliers on the business side, most recently as Senior Vice President/General Counsel. He is responsible for negotiation and execution of player and staff contracts, assistance with management of the team’s salary cap, player and staff immigration matters, trade and free agency strategy and execution, compliance with NBA rules, and general administration of the Team’s basketball operations, and liaison with the organization’s business operations. Between 2005 and 2017, he had primary responsibility for the organization’s business legal matters, including marketing and sponsorship, ticketing, lease compliance, employment, engagement with local governmental authorities related to Quicken Loans Arena, recruitment, preparation and execution on behalf of the organization of the 2016 Republican National Convention, and select basketball operations matters. Hillman was a real estate lawyer with Southfield, Michigan based Jaffe, Raitt, Heuer & Weiss, P.C. from 2001-2005. Prior to law school and continuing through his days in private practice, Hillman was a sportscaster on television and radio in the Detroit area.

He is a past member of the Board of Trustees of the Cleveland Metropolitan Bar Association and Cleveland-based Centers for Families and Children, and currently serves on the Board of Directors of University Hospitals’ Partnership for Families. Hillman resides in Solon, Ohio with his wife Meredith, and daughters Caitlin, Morgan and Devin.